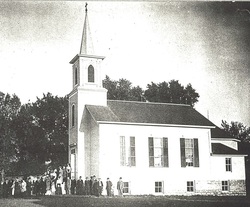 In 1880, the congregation acquired its first cemetery grounds, the Wet Coulee Cemetery.  This land is located on a high and picturesque hill.  It was a gift from the Peder Eliasen family.  Their two year old son Peder Jr. was the first to be laid to rest in the cemetery, having also been the first child baptized in the congregation after its organization.  This cemetery was dedicated at a special service by Pastor Frick on September 20, 1880.  It was at this meeting that Pastor Hjort was hired.  It is interesting to note that his salary was $3 for each service plus an offering at Christmas.  Later it was agreed to take care of the Pastor’s expenses for “himself and his team” in case it was necessary for him to resort to hotel accommodations.  This may seem like a small sum, but people of that day gave of their poverty, where we give of our abundance.

Pastor Wollert Frick resigned as pastor of the parish in May 1882 and returned to Norway and was replaced by Pastor O.C.O. Hjort.  The congregation now had grown to 31 families.

But renting a church is not the same as owning a church; therefore, at a congregational meeting in 1886, the matter of buying a church was introduced.  It was decided $400 asked was too high for the price of the Adventist church where they were having services.  A committee was selected to negotiate renting the Presbyterian Church.  Records show that services were soon held here.

Pastor Hjort preached his farewell sermon at Mindoro June 26, 1887.  Rev U.C.S. Hjermstad succeeded him and served the church until December 1902.  It is noted that his salary was increased from $36 to $100 a year plus an additional offering.  It was during this time, on April 23, 1896, the congregation purchased the Presbyterian Church for $610.

Thoughts of realigning the parish were consolidated in 1905 when action was taken to form a new parish.  Congregations in La Crosse Valley and Burns Valley voted to join the Mindoro Congregation and the pastor (Pastor Turmo) lived in West Salem. The Mindoro congregation voted to raise $600 toward the purchase of the parsonage in West Salem.

One son of the congregation, Rev BA Johnson was ordained in 1908. He was serving at Decorah, Iowa at the time of his death in November 1961.

In 1909, Pastor Turmo accepted a call in North Dakota.  Rev. O. Otterson was called and stayed with the congregation for 33 years.

In 1911, several improvements were made to the church, including a full basement, in addition to the chancel and balcony, and also the installation of complete chancel furniture and stained glass windows.

In 1930, Silver Tea Circles were organized for the women of the congregation.

In 1942, Rev. Otterson closed his ministry here, retiring in July after 50 years of active ministry.

Rev Charles T. Paulson of Rolette, North Dakota was installed in October.  Membership increased.  The Sunday school was organized.  The Every-Member-Envelope was introduced which resulted in increased contributions.  Sunday school attendance was over 70 in 1945.  Pastor Paulson resigned in 1945 and moved to Clamar, Iowa.

On April 15, 1945, Rev. O.T. Haaland of Cyrus, Minnesota was installed by Pastor George Ulvilden, Vice President of the Eastern District of the Evangelical Lutheran Church.

In 1946, the congregation officially became a member of the Evangelical Lutheran Church Synod after 74 years as an independent congregation.

On 1949, Joyce L. Ranum of West Hempstead, New York was called to serve our congregation. He was installed on September 18, 1949; he resigned in 1954 to establish a new congregation in the Edina-Hopkins area in Minnesota.

In 1950, a new sacristy, altar area, kitchen and restrooms facilities in the basement, plus oil heat, electric stoves and running water were added.

In 1954, the present two-point parish was formed with Lewis Valley.

A new parsonage was built in Mindoro. Much of the work was donated by members of the parish.

Pastor Winston Grant was installed on June 26, 1955.  Pastor and Mrs. Grant and son Stephan were the first to live in the parsonage.

October 9, 1955, was the Dedication and Open House of the new Lutheran Parsonage in Mindoro. Pastor Richard Holleque of West Salem officiated.

In 1959, the Circles adopted names of Biblical women.

In the fall of 1971, storm windows were bought and installed on the church and basement.

In 1974, Pastor Paul Johnson was called to serve our congregations.

In 1981, Pastor Miles Renaas was called to serve us.

In 1987, Pastor Frederick Thoni was called to serve us.  The American Lutheran Church merged with two other Lutheran bodies to form the Evangelical Lutheran Church in America, the ELCA.

In 1991, Pastor Karla Schollmeyer was called to serve us.  She married David Griffen while serving our congregations.

In May 1994, we dedicated our new addition.  It was built at the front of the church.  An elevator was added, as well as an enlargement of the narthex, a new office, a restroom, two classrooms and a new east-side entrance.

In 1996, Pastor Karla Schollmeyer Griffen accepted a call in Muscatine, Iowa.  From June 1996 – June 1997, our congregations were served by Interim Pastor Jean Kloss and Bishop Emeritus Stefan Guttormsson, as well as supply pastors.  The “With One Voice” Hymnal was purchased and is used along with the green “Lutheran Book of Worship”.
In 1997, building improvements included new shingles put on the roof, and new carpeting in the basement and the Pastor’s office.

In 1998, a Rodgers digital organ with MIDI was purchased and dedicated.  A new exterior entrance stairway was added by the Pastor’s office along with book shelving.

In 1999, the stained glass windows were reinforced, releaded in places, and had broken pieces replaced so they will be good for many more years.

In 2002, Lay Eucharist Ministry was started with six members volunteering to visit our shut-ins.  An amendment to our constitution’s by-laws was unanimously made to allow all baptized children to begin communing on a regular basis at a time determined through mutual conversation that includes the Pastor, the child, and parents and sponsors involved, within the accepted practices of the congregation.

In January 2006, Pastor Mark Jolivette accepted a call to Our Savior’s in La Crosse.

In 2007, Mindoro and Lewis Valley started having Joint Council meetings along with their individual meetings, alternating congregation meeting places.

In 2007, a Sunday offering counting team was formed freeing up council members from that duty.

In 2008, new carpet was installed both upstairs and in the basement.

In 2008, church members helped Pastor Houser move to Colorado to be with friends as her health declined.  Pastor Janet Wollam came to serve us in March 2008.  The parsonage lot line was also resolved, marked, recorded and both Mindoro and Lewis Valley are on the deed to this property.

In 2009, the new cranberry hymnal, the “Evangelical Lutheran Worship”, was introduced to replace the green hymnal, the “Lutheran Book of Worship”.

In July 2011, our new website was launched.  The Vision Team was added as a new format of church council to direct the other teams:  staff support, education, finance, property, outreach, and worship.

In August 2011, the Outreach Team hosted its first Neighbor Night.

In February 2012, the Outreach Team had its first Community Dinner.

In 2014, a new audio visual system was installed including a new sound system, a large screen, and a projector system.  A large cross was also installed in the east side garden area with memorial money from the Robert & Elizabeth Tracey Family.

In February 2017, the first Carnival Fundraiser was held.

In December 2019, the blue steeple cross was fixed and shines bright once again.

In April 2021, the Parsonage kitchen was remodel.